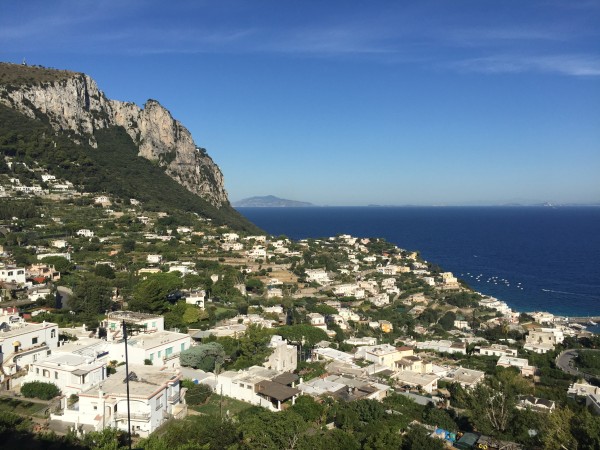 I’ve been dreaming of the beautiful Isle of Capri for years. I read about it over and over in Adriana Trigiani’s Valentine series. The main character, Valentine, travels to Capri searching for the perfect adornments for a pair of shoes she must create to keep her family’s decades-old shoe business alive. Along the way, she stumbles upon amazing people, beautiful scenery and, yes, a little romance. What more could you ask for? 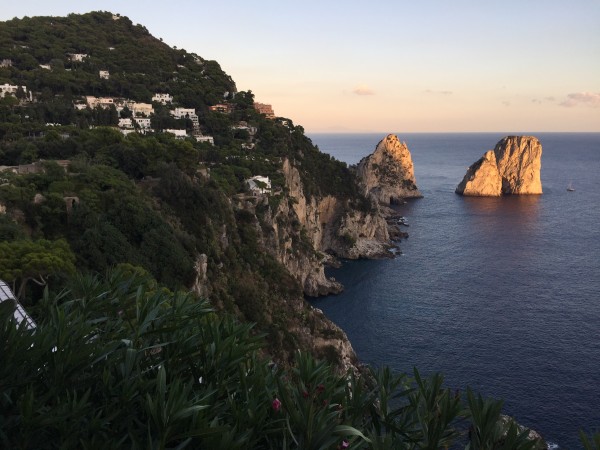 Capri is most famous for its Grotto Azzurra, or Blue Grotto. Thousands of tourists travel to the tiny island each year to experience the magical site. You take a row boat through a tiny hole to get inside the cave, where the light reflects off the water to create a beautiful glow of blue. The one downside — it’s hard to predict whether you’ll be able to get inside or not. Because the opening to the grotto is so tiny, conditions must be calm in order for the trip inside to be safe. Sadly, the waters were too rough during our visit for us to head inside. But, that just gives us a reason to return! 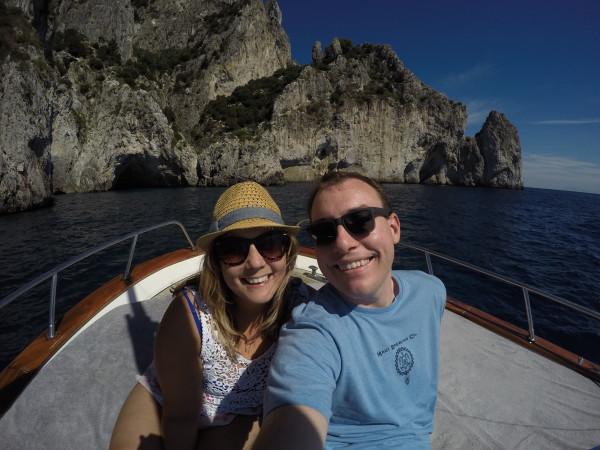 While we didn’t make it inside the grotto, we had a wonderful time boating around the island. I booked a private, three-hour tour through Gianni’s Boats ahead of time and it was one of my favorite experiences of our honeymoon. We took a traditional Capri-style boat around the island, with a local guide telling us all about the history and legends associated with Capri. 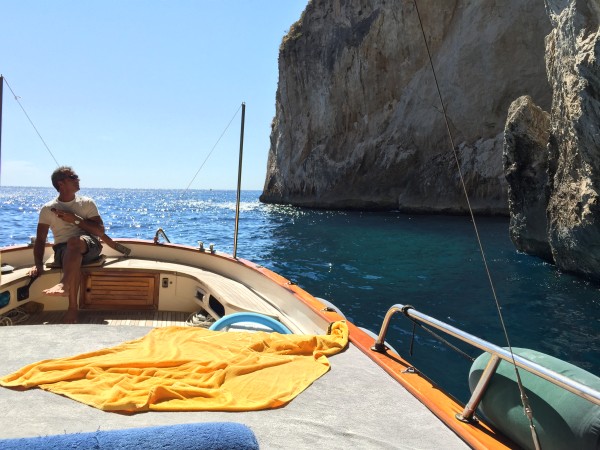 James was not a fan of the boat ride at first because it was a bit windy when we headed out, so the water was choppy. I thought that made it more fun! But, James was holding on for dear life. I looked back at our guide and he was steering the boat with his foot, so I wasn’t worried. Luckily, the water calmed down once we got around to the other side of the island. 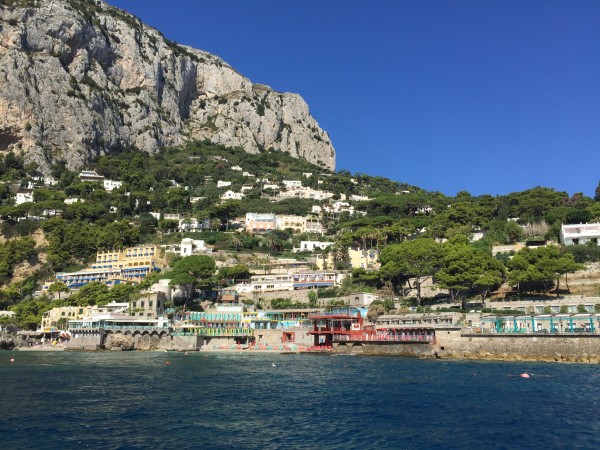 It’s amazing to see how much Capri changes when you’re on a different side of the island. There hasn’t been a new building permit issued there for about 25 years. And, people who have built recently have done so on the more exclusive side of the island, where famous people have erected multi-million dollar mansions. It’s a point of contention for the locals, who say they have no options if they want to move because everything’s become so expensive. 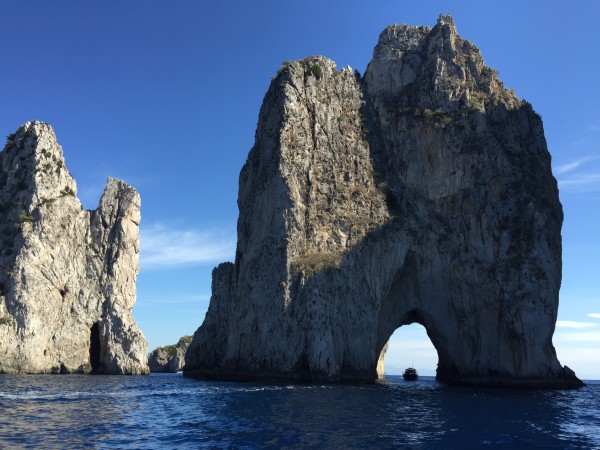 We passed by several grottos on our boat ride, as well as the famous Faraglioni of Capri — a stunning formation of three rocks jutting out of the sea. Pictures of the scenery doesn’t do it justice. 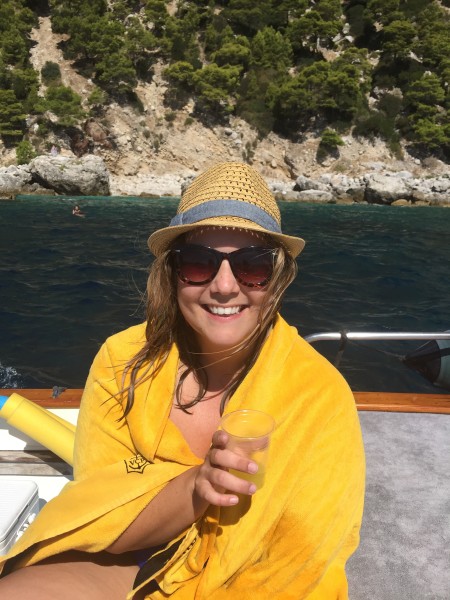 We took a few minutes to hop out and swim during the tour and were greeted with homemade limoncello as we dried off. It was the best limoncello I had during our whole trip — mainly because it was the strongest! I’m told it was made by the owner of the company’s mother. 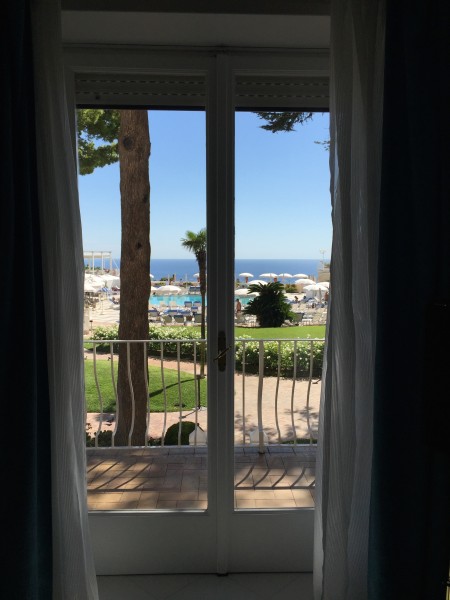 After our boat ride, we headed up to our hotel to check in. This was one of our biggest splurges of the trip. After reading the Valentine series, I knew we had to stay at the world-famous Grand Hotel Quisisana. It was absolutely stunning. Our room wasn’t ready right away, so they upgraded us to a room with a balcony overlooking the beautiful pool and sea. I can’t imagine waking up to those views every morning. 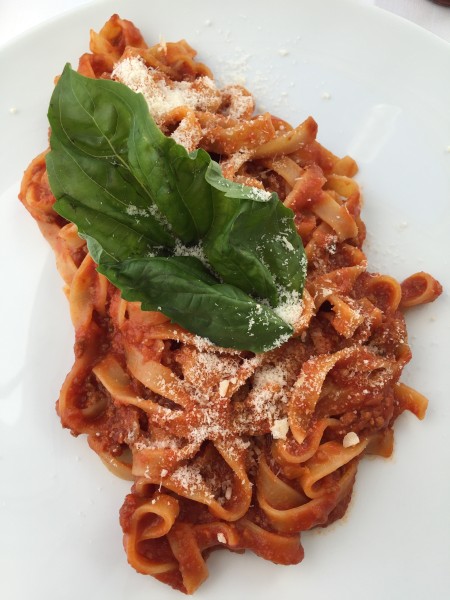 Once we got changed, we headed out for a late lunch. I had been dying to try Paolino, a romantic restaurant situated among lemon trees (and the restaurant Beyonce went to while visiting the island earlier this summer). But, we were so hungry we didn’t want to trek all the way back down to the marina area to eat. That gives us another reason to go back! We instead opted for a restaurant near our hotel that had a decent menu. We scarfed our food down after having anything to eat for about eight hours! 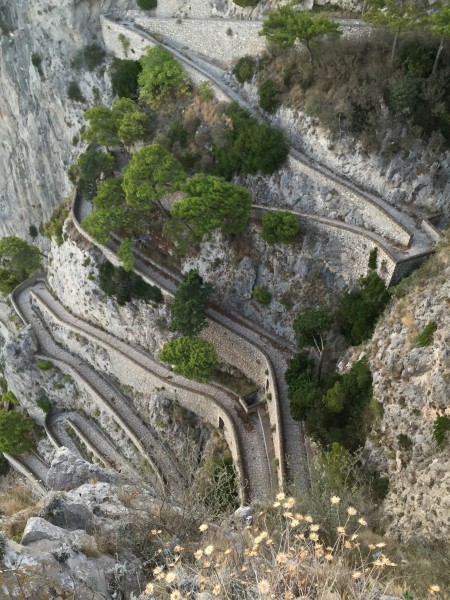 Once we had some food in us, we spent the afternoon by the pool at the hotel. Swimming while looking out at the sea was amazing. Once it started to get a little cooler, we threw some clothes on and walked over to the Augustus Gardens. For one euro, you can enjoy the terraces of flowers and wonderful views of the sea. We were also able to get a good look at a famous, terrifying road called Via Krupp. There is no way I would drive down that! 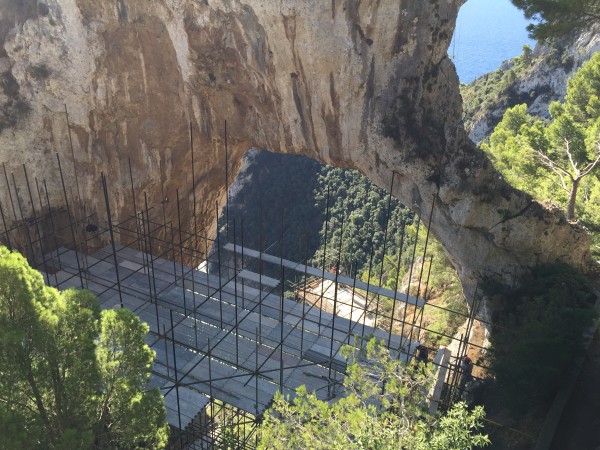 We spent the rest of our evening sipping wine on our balcony before heading to bed. We woke up the next morning and enjoyed the amazing spread at the hotel’s breakfast buffet before doing a bit more hiking around the island. We walked up to see the Arco Naturale, but it was covered in scaffolding because there are fears it will fall without some type of extra reinforcements. The walk was worth it though — we were able to get away from the heavily trafficked areas of Capri and enjoy a peaceful, scenic stroll. 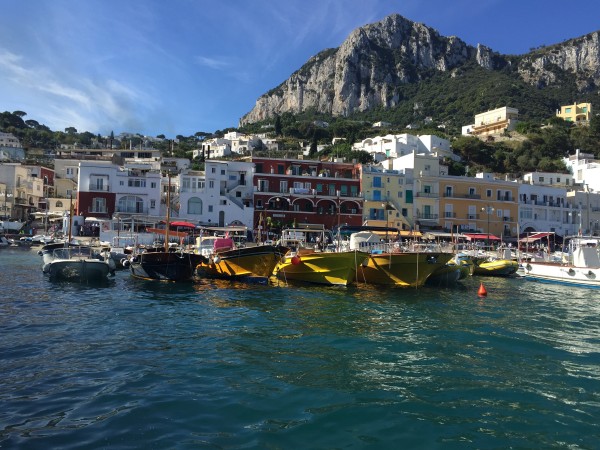 I wish we had stayed in Capri longer — we had to leave by about noon in order to catch a ferry to Naples and a train to Rome. We were only on the island for about 24 hours. 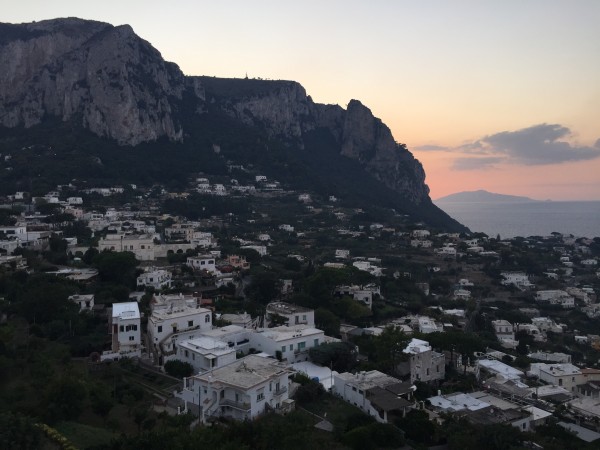 There are so many places I still want to see — Emperor Tiberius’ Villa Jovis, the views from Anacapri and the famous Blue Grotto. James promised we’ll go back someday. I’m hoping it’s sooner rather than later, but until then I’ll be dreaming of the beautiful island that captured the hearts of emperors and movie stars — I certainly left a piece of my heart behind.