Happy Sunday, everyone! We’re relaxing after spending a night in a cabin at McCormick’s Creek State Park with a few friends. We had a blast hiking around to the waterfalls and Wolf Cave. We can’t wait to go back!

We also can’t wait to go back to Cincinnati, which is where we spent the last few days of our minimoon last week. We originally had plans to head north to Lake Michigan to celebrate as newlyweds, but when we saw the lineup for Bunbury Music Festival, we couldn’t resist. Neither one of us had been to Cincinnati before, so we were excited to explore the city! We booked a downtown hotel through Hotwire, which we’ve always had great success with. We landed at the 21c Museum Hotel, a boutique hotel that also includes an art museum guests can visit for free, 24 hours a day. It was walking distance from Sawyer’s Point, which is where Bunbury was setup for the weekend. 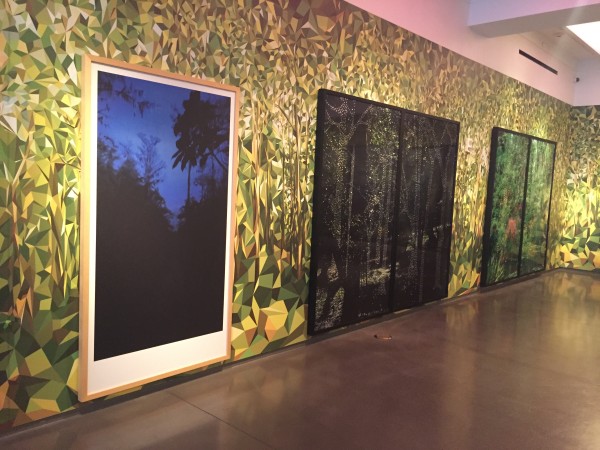 We loved the funky, modern vibe and friendly staff. The hotel also has a rooftop bar, which we didn’t have a chance to checkout but heard great things about. We definitely want to stay at 21c again! 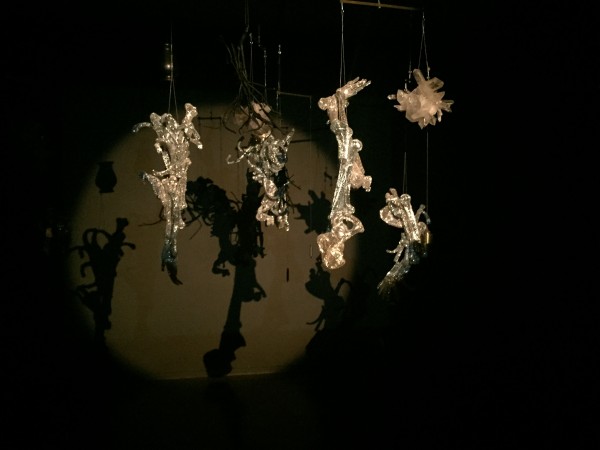 Before the festival kicked off on Friday, we headed down the street to check out the Over-the-Rhine neighborhood. Several friends who are from the area gave us great recommendations for places to grab drinks and grub. We started at Senate Pub, a small joint known for their gourmet hot dogs.

The couple sitting next to us told us we had to try the poutine, which consisted of french fries, cheese curds, gravy and short ribs. It sounds like an odd combination, but it was delicious. James is a big fan of poutine and decided this was easily the best variation he’s had. 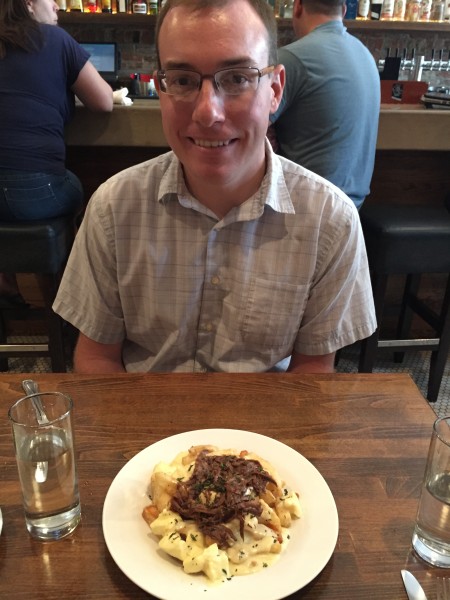 We were pretty full after eating the poutine and quickly discovered we should have split a hot dog instead of each ordering our own. 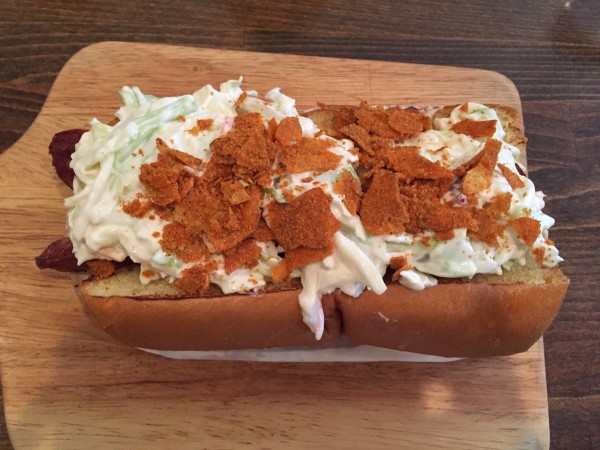 I ordered the ‘trailer park’ —a hot dog topped with coleslaw and Grippo’s chips. It was out of this world, but I was so full I could barely get 1/4 of it down. We were full the rest of the day! 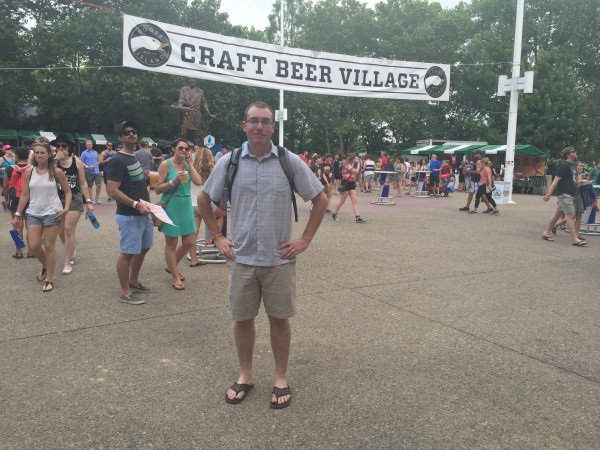 Once we got to Bunbury, we headed straight for the Craft Beer Village. I was excited to see 21st Amendment’s Hell or High Watermelon on tap. I’ve been waiting to try that beer for three years! It was delicious — not overly fruity and the perfect beer to drink on a hot, sunny day.

We spent the rest of the afternoon taking in several great shows. Father John Misty and Walk the Moon were both amazing. We stood around at the main stage for several hours in order to get a good spot for The Black Keys, one of James’ favorite bands. 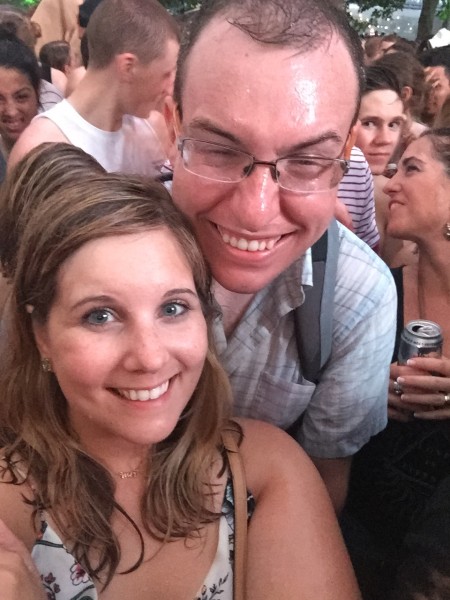 We got poured on in the process, but it was worth it to see such a great show up close. James has wanted to see them in concert for years, so that show was the highlight of his weekend. 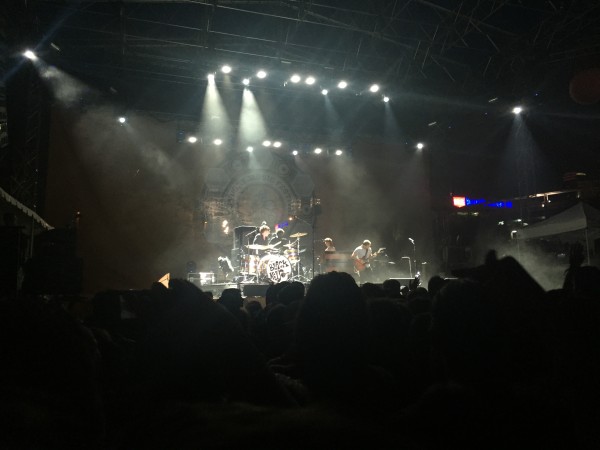 After sleeping in on Saturday, we headed back to Over-the-Rhine to grab brunch and look around a bit before concerts started later in the afternoon, but quickly realized just about every other person in town had the same idea. We decided to try for lunch at The Eagle, a Cincy staple known for its fried chicken. Once again, we ordered way too much food. 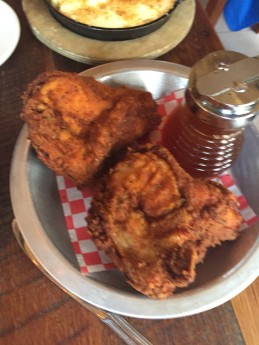 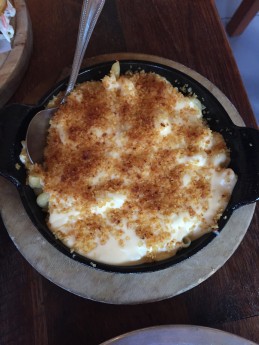 James also got a fried chicken sandwich. I had a chicken breast and a few bites of the mac and cheese — both were phenomenal, but so heavy and rich. This was James’ favorite place we ate all weekend. Once again, we left feeling extremely full and didn’t eat much for the rest of the day. 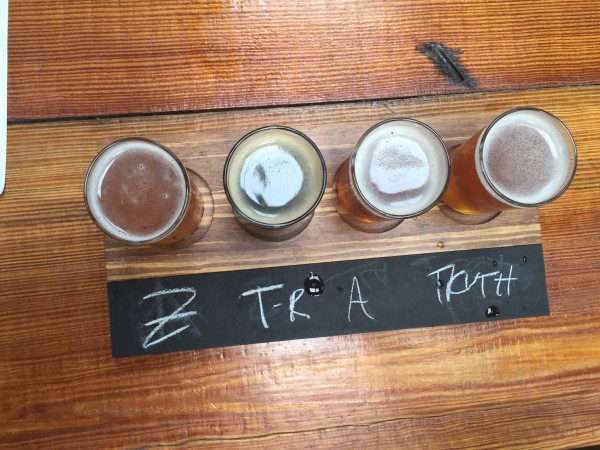 We did, of course, make room for beer. We’d heard great things about Rhinegeist. This is hands-down the coolest brewery we’ve been to. Not only are their beers top-notch (five different IPAs on tap — our kind of place!), but the atmosphere is so unique. 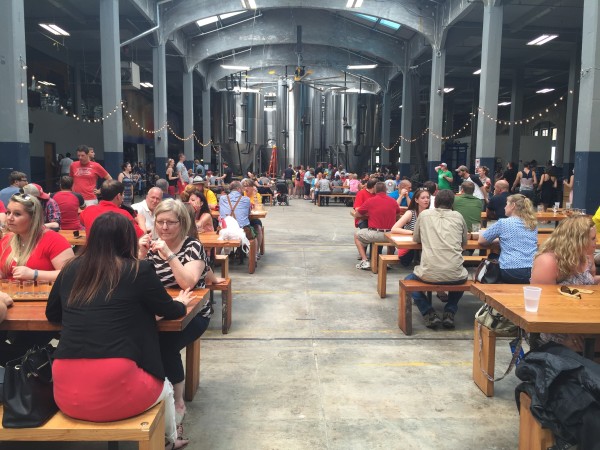 The brewery has an open floor plan, reminiscent of a German beer hall. There were several sets of bags for people to play, as well as table tennis. There were two bars, so lines for beer were never too long. While Rhinegeist doesn’t serve food, they encourage people to bring their own or order delivery from nearby restaurants. James ordered a couple pints and I decided to go with a flight so I could try several different beers. I selected four IPAs and we both decided Stryker, their Triple IPA, was our favorite brew. We stopped by a grocery store on our way out of town to pick up some cans of our favorites. We’ll definitely be making another trip to Rhinegeist! 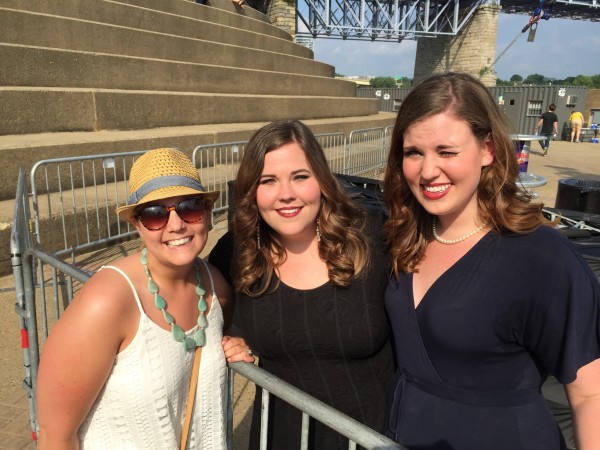 After gorging ourselves on beer, we headed down to Bunbury to take in some more great shows. We felt a little less guilty about indulging because the non-stop walking we did while at the festival. We saw one of our favorite bands, The Secret Sisters, play with the Ohio River as a backdrop. They are always amazing live. Last time we saw them was at the Hi-Fi in Indy, which is a pretty intimate venue. It was a completely different experience to see them on a giant stage playing to hundreds of people! 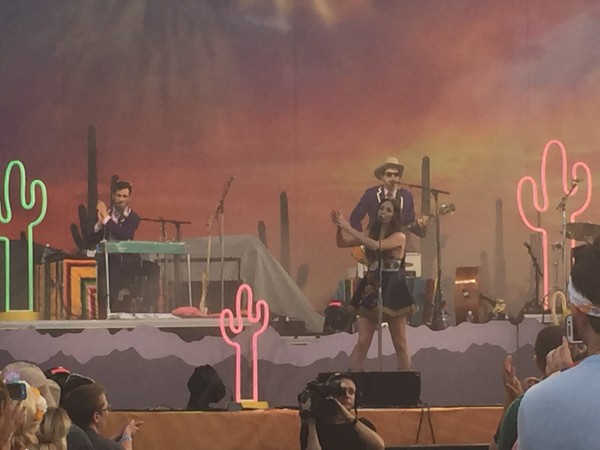 Another highlight of the day was seeing Kacey Musgraves perform. We had a great spot for her show and got to hear her sing one of her new songs from her upcoming album.

We left the festival shortly after The Avett Brothers started playing because we were absolutely exhausted.

Our last day in Cincy seemed a lot more relaxing. We didn’t have any shows we wanted to get to until about 3:45, so we were able to hang around downtown for a bit before heading down to the Riverfront. We started our day with brunch right across the street from our hotel at Nada. We made a reservation after we saw it was pretty packed throughout the weekend. James decided to start his day with tequila since it was the last day of our minimoon. 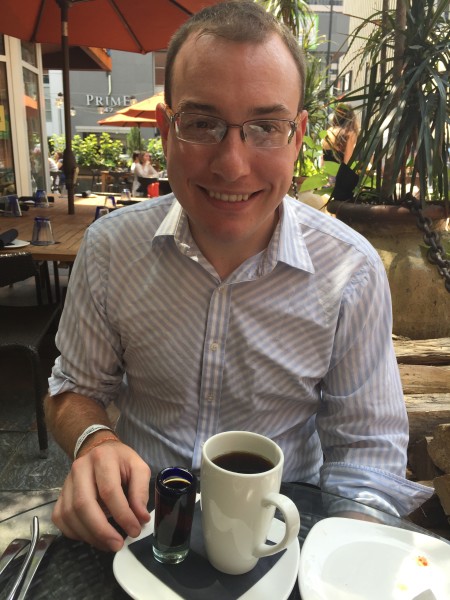 We split chips and salsa to start and both ordered different variations of enchiladas. Everything tasted extremely fresh and the dishes weren’t too heavy, which was a nice change of pace after a couple days of eating extremely rich meals. 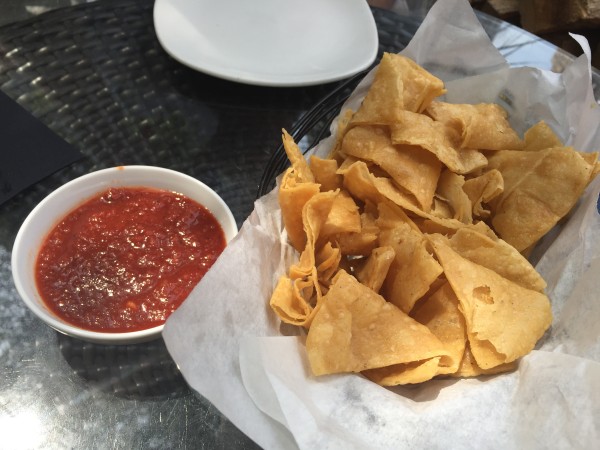 We decided to walk down to the National Underground Railroad Freedom Center after brunch to check out some of the exhibits. I would highly recommend the museum — the building itself is beautiful and many of the exhibits were interactive. We really enjoyed walking through and learning a little more about the history of the Underground Railroad and the brave people who were involved.

There’s also an amazing view of the river from the second story balcony. 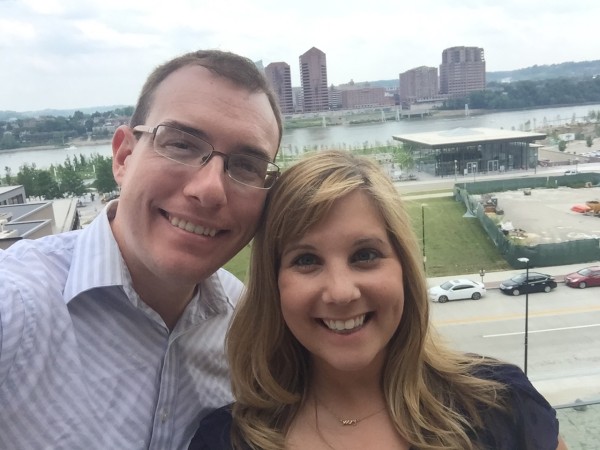 After a couple of hours at the museum, we headed down to catch our last shows of the weekend. We got to see Reverend Peyton’s Big Damn Band, a group from Brown County. They put on one of the best shows of the entire festival with their powerful, unique spin on the blues. They had everyone up on their feet at one point, which was one of my favorite moments from the weekend. Go see them if they come through you area — you won’t be disappointed!

The last show of the weekend for us was Shakey Graves, who we saw perform in Indy a couple of months back. He put on another great show and it was the perfect way to end the weekend. 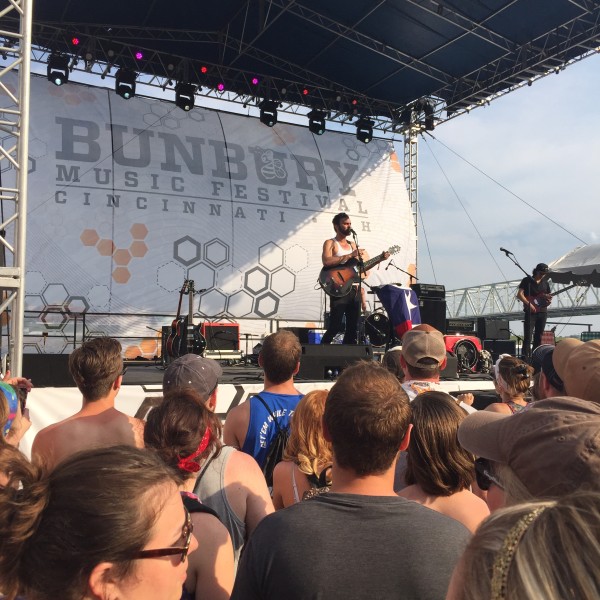 A lot of people looked at us like we were a little crazy when we said we were going to Cincinnati of all places for our minimoon, but we’re so glad we did. We had an absolute blast and are already talking about going back for a Cubs vs. Reds game! If you’re in the Midwest, it’s worth making a weekend trip over to Cincy.